2020 has been a challenging year, to say the least. Nevertheless, we hope to make your Christmas and Hanukkah shopping as stress-free as possible!

Because of COVID-19, supply chains have been disrupted across all product categories, including toys. Fat Brain Toys has stocked up early, but we are still anticipating possible shortages as we get into December. Plus, we've been warned by our carriers that deliveries could be delayed during the peak shipping season.

To avoid the potential for delays, we ask that you please shop early! Rest assured, our "Elf Crew" will do their part to get your packages shipped and into your hands as quickly as possible.

We appreciate your patronage and wish you and your family all the best this holiday season.


You have Signed Up for Deals & more!

The Battle Against Pediatric Brain Cancer

Pediatric brain cancer is currently the leading cause of childhood cancer deaths. Nearly 30% of children diagnosed with brain cancer will pass, while many survivors will be left with lifelong disabilities.

Pediatric cancer in general is underfunded (attaining a mere 4% of the National Cancer Institute's funding), with only 5% of that NCI sum dedicated to brain cancer research (despite being the deadliest childhood cancer with possible long-term side effects!).

Most research funding comes from non-profit organizations like the Team Jack Foundation. This funding is crucial to help combat the disease and explore treatment options, from identifying genetic mutations through building "smart drugs" and immunotherapy treatments. Team Jack works closely with a scientific advisory board to identify and explore the best treatment options to pursue with funding.

At one end of the spectrum, pediatric brain cancer can negatively impact or destroy a child's ability to love, speak, see, run, balance, create, and laugh. At the other end of the spectrum, Fat Brain Toys' mission to provide "A Smarter Way to Play" seeks to strengthen a child's abilities in verbal skills, visual acuity, balance, sensory discernment, nurturing, creating, building, and problem-solving.

Building these skills and the foundations of your personality are essential for human growth, and tumors that strike this still-maturing organ can be devastating. Any disease that compromises a child's ability to grow, learn, and live impacts us deeply. And so, partnering with the Team Jack Foundation to help defeat pediatric brain cancer was a logical choice for us.

Our company and our employees have taken this important cause to heart, and we hope you decide to join Team Jack. Who is Jack and What is Team Jack All About?

The Team Jack Foundation is comprised of hardworking Team members directly impacted by the disease and committed to fighting it.

The foundation was formed in Atkinson, Nebraska, during Jack Hoffman's battle against cancer. Initially diagnosed at the age of six in 2011, Jack has undergone two life-threatening surgeries, chemotherapy, remission, relapse, and immunotherapy. His family started the foundation so that, while he continues to fight, Team Jack continues to raise funds for research.

How can you help?

During the checkout process at FatBrainToys.com, you'll be given the opportunity to add one dollar. For example, if your Fat Brain Toys purchase is $22.80, you can ad one dollar to make it $23.80. 100% of your contribution will be donated directly to the Team Jack Foundation which will fund research aimed at curing this terrible disease.

DONATE: During the checkout process, simply click the "ROUND UP" checkbox to make your donation. 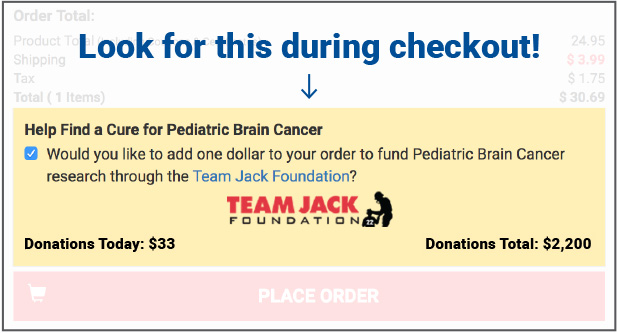 
An error has occured, please try again. If the problem persists contact Customer Service at 1-800-590-5987